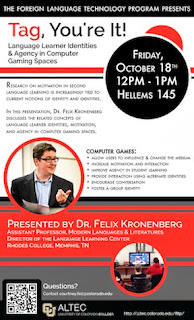 I was recently invited to give the fall keynote for the FLTP (Foreign Language Technology Program) at the fantastic ALTEC at the University of Colorado at Boulder. Here’s the video:

And here’s what the talk is about:

Research on motivation in second language learning is increasingly tied to current notions of identity and identities (Ushioda and Dornyei, 2009). In this presentation, Dr. Felix Kronenberg discusses the related concepts of language learner identities, motivation, and agency in computer gaming spaces.

Computer games allow users to influence and change the medium itself and have been linked to intrinsic motivation, including the experience of flow (cf. Csikszentmihalyi, 1990). Wolf (2002) argues that video games’ use of space is unique because of its added elements of navigation and interaction and shares only some properties with those of other media, such as films. This ability to exercise choice and effect change is referred to as agency: “the satisfying power to take meaningful action” and experience the results (Murray, 1997, p. 126). “In games, just as in real life,” Aarseth (2004) argues, “the outcomes (winning, losing) are real and personal to the experiencer, unlike in stories” (p. 366).

Computer games can also be used to create alternate identities, for example individually through the use of avatars, or to foster a group identity among the players/learners and encourage conversations around a shared, genuine interest. The sense of belonging to an in-group may build positive classroom dynamics and lower anxiety and inhibition.

Concrete examples from the classroom and the Language Learning Center at Rhodes College will be given to illustrate the theoretical concepts of identities and agency.

Felix Kronenberg is working at Rhodes College in Memphis, TN. His research interests include academic space design, video games and language learning, digital storytelling, and the culture of advertising. He teaches German and language pedagogy, and maintains the Language Technology Boot Camp blog and web site.